In the scheme of our family holiday to New Zealand, I was a bit ‘ho-hum’ about our planned to visit to the Hobbiton movie set.

I was given a book of The Hobbit by a dear friend many years ago, but try as I might, I never finished it. I did not go with my family to see The Hobbit movie & I saw the first Lord of the Rings because I thought Orlando Bloom was a bit of a spunk.

So, seeing the movie set was more about appeasing my husband and son. But don’t you love it when something you are not especially looking forward to becomes a highlight of your holiday?

The Hobbiton movie set is located an easy drive from Auckland on New Zealand’s North Island, near the township of Matamata.

Our drive there was eventful to say the least. We were leaving the small town of Waitomo (famous for its caves) and needed to head west. I decided to take an “Amanda short-cut”.

To put this in perspective, this is where I look at a map and decide to use short-cuts to get somewhere instead of going the main-road route. This usually works in suburbia, but has blown up in my face in rural areas.

I should have known better. I should have listened to my husband, but I did not. Suffice to say a trip that would have taken about an hour and a half on the main roads took almost double that.

A poor map and contradictory road signs took us down a mountain range, and back up the other side. We then ended up arriving at Hobbiton from the wrong end, travelling down a very quiet, windy country road with little traffic & no directional signs.

A visit to the Hobbiton movie set is a must – even for those who are not fans of the movie.

But we got there – and boy, was it crowded. This was obviously a popular place to be. Despite the look of chaos, it was well organised. Tours left every half hour & we got our tickets for the tour that left about an hour later – time to have a coffee and bit to eat at the café.

TIP: if you don’t want to risk waiting for the next available tour, pre-book your tickets via the official Hobbiton tours website.

The only way to see the set, which is located on private farmland, is on a tour. You leave the main entrance on an old, rackety bus for about a 10 minute ride (the state of the bus was my only complaint – the one we were on had serious trouble getting up the hills and looked & felt like it was about to fall apart).

Bilbo’s house. The tree is not real, with the leaves all woven on the branches by hand 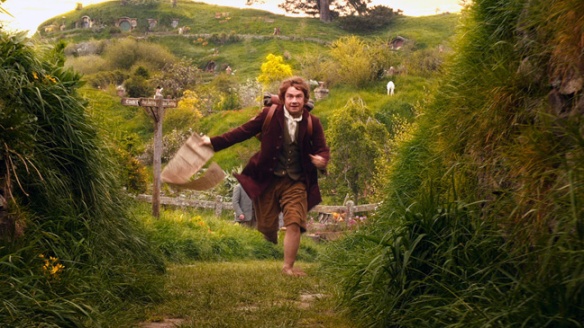 Along the way, our young local tour guide gave us some history about the film set (owned by one very lucky local farmer) and how it was found by director, Peter Jackson, and came to be.

Construction of the set, for the Lord of the Rings trilogy, started in March 1999 and took 3 months. After filming was completed, the set was dismantled. However, following its reconstruction in 2011 for the Hobbit feature films, it was left as a permanent structure, in a boom for local tourism.

So, what is so special about this place? For me, it was the overwhelming sense that you are in a real place – that these little creatures called Hobbits do exist and are at home behind their little round doors, doing what Hobbits do.

That any minute, they will come out to tend to the plants in their gardens, will pick the fruit off the fruit trees or will bring in the washing that is hanging on the line.

The Hobbiton gardens are have their own human gardeners to keep them in shape.

This is not just a place for Tolkien pilgrims & Jackson movie fans, but provides a close up experience to a Hollywood-like film set and an understanding of how creative & clever these people are. The attention to detail is amazing.

Looking across Hobbiton to the Friendship Tree.

There is firewood stacked outside doors, gardening tools left lying amongst the plants, small baskets waiting to collect flowers or vegetables. It is like everyone has dropped what they have doing & disappeared.

Behind the doors of a Hobbit’s house

Playing underneath the Friendship Tree

The tour itself is also interesting. Our guide was a local, with a pride and passion for both the movie & the local area’s role in movie history. The tour also left everyone with enough time to take photos and take it all in.

A lovely end to the tour, which lasts about 1 hour, 45 minutes, was the complimentary glass of cider in the Green Dragon Inn, which unlike most the other buildings in town, was not just a door. 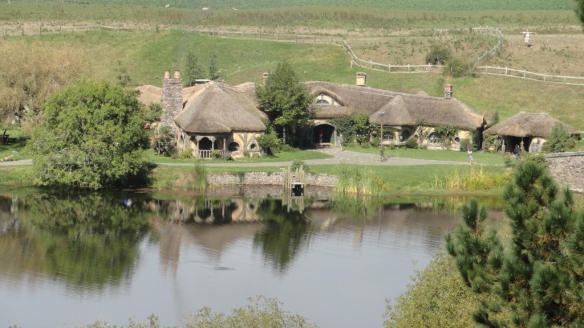 Looking across to the Green Dragon Inn 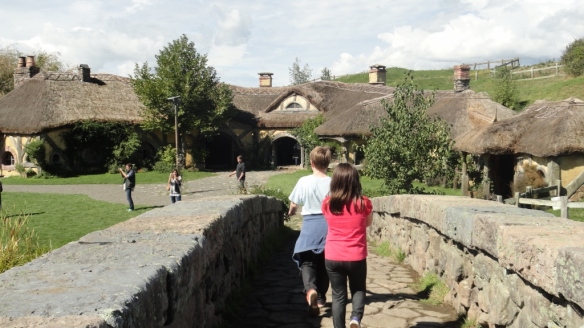 Walking across the bridge to the Green Dragon Inn

It is real, it is gothic and it is gorgeous. The Inn was the local meeting place for the hobbits in the Lord of the Rings trilogy. Lucky New Zealanders can hire the inn for private functions. Other than that, the only way to visit is on a tour. I didn’t want to leave.

Round window with a view

A visit to Hobbiton is not cheap (just under NZ$200 for our family of 4), and you won’t see Orlando Bloom or Martin Freeman for that matter, but I think it was money well spent and I would recommend putting it on the itinerary of any family holiday to New Zealand.

Learn more about the tours and where to stay on your New Zealand family holiday.