I love travelling with my family, but I am not a highly adventurous traveller. Luckily for us, my mate, Michael Birt, is. Last year he took his family beyond Bali – in this special guest post he tells us all about it –

There’s so much more to Indonesia than Bali, yet many Australians go there year after year and forego the opportunity to travel more widely in this diverse and interesting country that’s close to Australia and easy to get around.

It’s a way to escape Bintang singlets and pushy souvenir sellers and revisit some of the adventure of your backpacking days.The best part is you can get there easily as part of a Bali holiday or without going to Bali at all.

The land content of our five days in Java for five people –mum, dad and kids aged 9. 11 and 13 – gave us change out of $1000. Buses run from Bali to Java and even join Indonesia’s rail network, but time was against us so we took a 55 minute Garuda flight to Surabaya in a very new 737.

Several airlines fly from Denpasar to Surabaya where we were met by our guide Salim and driver Mat from Bromo Tour, one of many companies that take people to the active volcano, Mt Bromo. 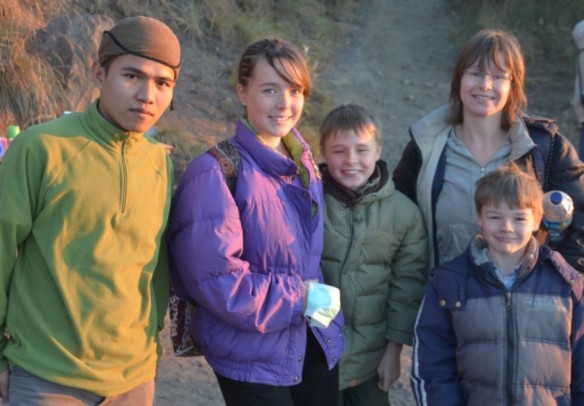 About two hours from Surabaya, Mt Bromo is a 2329m high volcano which last erupted in 2011. Places to stay on the mountain range from basic backpacker and home stay accommodation to three star hotels.

We took two rooms at the Cemara Indah Hotel which is right on the crater rim and from where you look down to the Sand Sea where small tornadoes of volcanic sand spin across the moonscape.

For the sunrise tour you leave your accommodation around 3.30am and drive up a steep road as far as the jeeps can go. You then walk or ride a horse up the next stage and there’s a short, sharp climb to the viewing point where you can watch Mata Hari – eye of the day – rise in the east and illuminate several volcanos emerging out of the darkness. 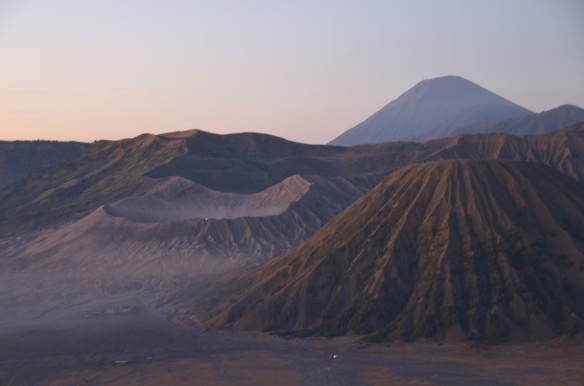 Mr Bromo – an active volcano that last erupted in 2011.

Back to the jeeps and into the caldera and the climb of Mt Bromo. Before driving across the 8km-wide Sand Sea wrap your camera in a sarong as the grit and ash will get in to it. You can walk or ride a horse part of the way to the foot of the 210 steps up the side of Mount Bromo. 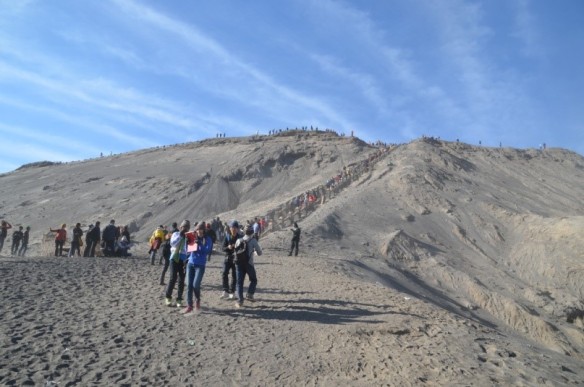 Walking the rim of Mt Bromo

It’s still only about 6am and the air is thick with the smell of sulphur, but your trusty sarong again comes into its own, this time as an air filter. It’s steep, but worth the effort, however if you get asthma it might be worth carrying a puffer.

Once at the top the crowd spreads out along the rim and it’s still not even 7am, but you’re up and ready for breakfast…it’s been a big day!

Back in Surabaya the Dutch-colonial Majapahit Hotel could be no different to the accommodation on Mt Bromo. For us, used to camping, motels and fibro holiday houses, there was quite a lot of ‘How good is this?!’ when we got to our room.

The hotel has manicured gardens, a day spa and a beautiful pool and while you are in a major city, the sound of the outside world rarely encroaches. Because of time constraints we only stayed one night which is a great shame. It would not be hard to stay a week and just relax.

The next leg was across Java by train to Yogyakarta. Surabaya railway station is a short taxi ride from the Majapahit and while there are some English-speaking ticket sellers keep your Indonesian phrase book handy. 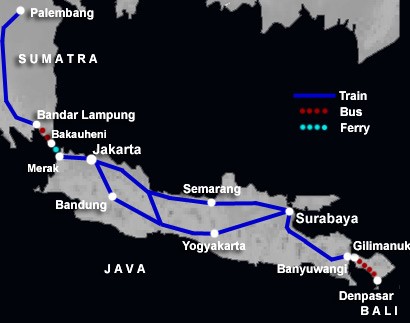 The excellent Man in Seat 61 website is the world railway traveller’s friend and it’s a great source of information when you’re in unfamiliar territory. I bought our tickets at the station the afternoon before we travelled, but you can also buy them online.

We took the very comfortable 7.30am train for the three-hour journey across central Java to Indonesia’s second biggest city, Yogyakarta where we found a taxi for the half-hour drive to the World Heritage Borobudur temple.

We stayed two nights at the Sariswati Hotel which has a lovely pool, gardens and restaurant. Surprisingly it was very quiet as most tourists bus in from Yogyakarta.

While unfortunate for the hoteliers, a side-benefit for those who do stay is that once the ‘out of towners’ leave you can wander the streets of this quiet town.

Borobudur is a Buddhist temple and was built in the ninth century. Rediscovered in ruins in the early 19th century Borobudur is open for pre-dawn viewing, however later in the day, though hot, is not so busy.

Borobudur – a Buddhist temple built in the 9th century and re-discovered in the 19th century.

Each level of the temple is covered in engravings showing the difficulties of the earthly life, but as you go around and up towards statues of the Buddha, you are heading toward nirvana, the supreme state of consciousness.

We had a late afternoon flight back to Bali so had time to visit the Hindu Prambinan temple back in Yogyakarta. Only a short drive from the airport it’s set in an enormous park filled with shady trees which would be a popular local attraction and a nice place to ‘blob out’ on a travelling rest day. 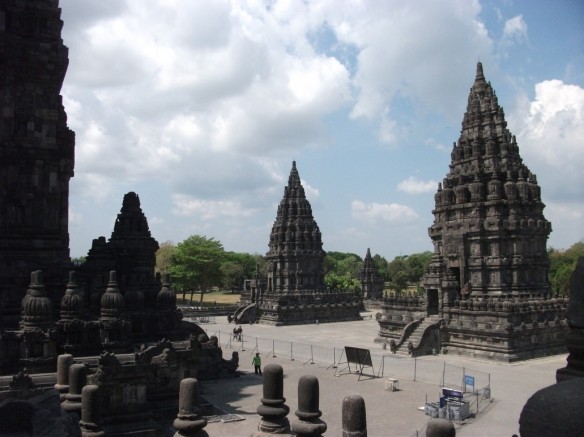 The Prambinan Hindu temple in Yogyakarta.

Each temple is dedicated to a particular god and many still have an image of him/her inside.

Our trip to Java took five days but it could have been done more quickly or more slowly. We really only scratched the surface, but it gave the kids an insight into a new culture and the knowledge that you could have a good time without resorts and fun parks.

We saw few western tourists in Java and it was a nice change from the annoying aspects of Bali. People were always friendly and while our Indonesian was minimal there was always someone who spoke sufficiently good English who would help.

As a family we learned to get on while on the move and it brought as closer together. It was a shame we only had five days…